Mineradora Vale will invest R$ 3.9 billion in works for a bridge over the Tocantins River for the outflow of iron ore production on the Carajás Railroad

per Ruth Rodrigues
-
–
in Logistics and Transport, Mining 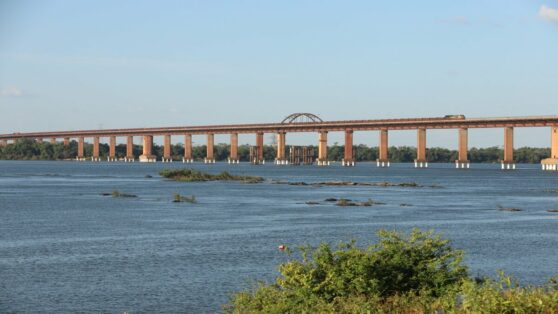 Mineradora Vale will make a billionaire investment in a new bridge built on the Tocantins River. Source: Reproduction

The new bridge that will be built over the Tocantins River, in Marabá, will expand the capacity of the Carajás Railroad to transport iron ore produced by Mineradora Vale, which will invest billions in the project.

With a total investment forecast of R$ 3.9 billion, the new bridge by Mineradora Vale over the Tocantins River, announced last Tuesday (04/19), will be essential for the flow of iron ore production on the Estrada de Ferro Carajás and is expected to have the works completed around the year 2027, according to the company's projections.

The mining company Vale made a surprising announcement of a new billion-dollar project that aims to expand the capacity to transport its iron ore production on the Carajás Railroad. Thus, the new bridge over the Tocantins River will be the company's new bet to facilitate and dynamize this transport in the Marabá region, in addition to being essential for the process expansion of the logistics of handling this cargo.

The information on the amounts that will be applied by Vale in the construction works was taken from the 20F report, sent by the mining company to the Securities and Exchange Commission (SEC), the regulatory body of the US capital market. Thus, the company's initial projection is that the construction of the new bridge will begin in 2023, after the necessary bids for this, and be delivered for use during the year 2027, since the project requires a long period of development of the works project.

With the completion of this construction, the flow of Vale's iron ore production in the region via the Carajás Railroad will become even more practical and efficient, which justifies the billion-dollar investment within this structure, as the company will be able to further expand its business around this ore. Finally, the project includes a second road bridge for vehicle traffic, which will reinforce the connection between the Southeast of the State of Pará and the northern Brazilian coast.

The only existing bridge currently in the region for the transport of vehicles is located on the Carajás Railroad itself and, as a result, the flow of Vale's iron ore production is highly affected. In addition, the company has been suffering from a big fall in the production of raw material and the works for the new bridge will be the mining company's new bet to reverse this situation.

In its latest report, the company recorded a 13.5% drop in its total iron ore reserves in 2021, reaching a volume of 12.495 billion tons and the document stated that: “Changes in iron ore reserves from 2020 to 2021 mainly reflect depletion resulting from mineral production at operating mines (corresponding to approximately 414 million tons), downgrades resulting from strategic review of long-term projects and other changed factor assumptions (geotechnical, market and processing)” .

In this way, the possibility of a new route for the outflow of iron ore could make Vale reverse this situation and be able to apply a new investment focused on this production, which currently has a route that is still very scarce with an adequate structure for the transport of the iron ore. bulk.

Tags: CarajásRailroadiron oreTocantins RiverOK
previous post Mining companies settle in Mato Grosso do Sul, generating more than 300 job vacancies in the state
next post Ufopa and Alcoa team up to invest R$ 2.3 million in a technology and research center aimed at improving the mining sector in Pará