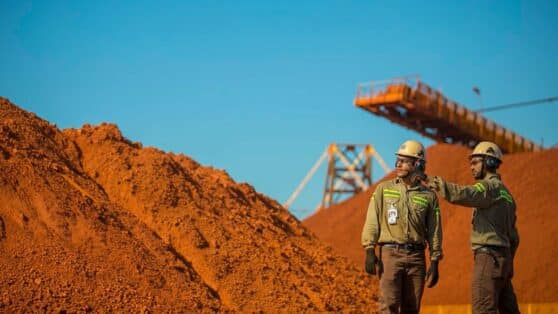 With a gigantic presence in the field of bauxite exploration in municipalities of Pará, MRN is a reference in Brazilian mining and now the Australian company South32 now has 33% from the company after a transaction made with the company Alcoa

The Australian company South32 announced last Tuesday, (05/03), the acquisition of a new slice that made up the 33% of Mineração Rio do Norte (MRN). For this, a transaction was carried out between the Australian company and Alcoa, which held the rights to this slice of the shares of mining company. Now, South32 will be able to invest in the exploration of bauxite within the municipalities of Oriximiná and Terra Santa, in Pará, which make up the main focus of MRN's portfolio in the mining sector within the national territory.

South32 makes a transaction with Alcoa and now holds 33% of MRN, focusing on the exploration of bauxite within mining operations in the state of Pará

MRN is one of the largest mining consortia in Brazil and has a vast production of bauxite, with operations covering the municipalities of Oriximiná and Terra Santa, in Pará. Now, the company has a part of 33% of its operation in the hands of the Australian South32, which joined Alcoa to carry out a transaction and acquire another 18.2% from the company, which were added to the 14.2% already held by the company.

And, after the transaction concluded between South32 and Alcoa for the acquisition of the share of MRN, South32 becomes the second largest shareholder in MRN, since the Australian mining company had 14.8% and now totals 33%. Although the amount was not disclosed between the parties, Alcoa held a large stake in MRN's bauxite exploration and the Australian company will now be able to take advantage of this entire portfolio.

As the largest company in the field of exploration and production of bauxite across the country, MRN has an installed capacity of 18 million tons per year and, according to the company, current production is 12 million tons per year. Now, after the completion of the transaction between South32 and Alcoa, MRN is now divided between Vale, with 40%, South32 (33%), Rio Tinto (12%), Brazilian CBA (10%) and Norwegian Hydro (5%).

South32 has been seeking an even greater presence within the mining and steel industry in Brazil and seeks to expand its aluminum production. Thus, for a greater supply of its production chain, the company stated that the purchase of MRN guarantees an even greater supply of bauxite and that, over the next few years, it will continue to expand investments in the exploration of the ore to obtain an even higher supply. of its operations.

In this way, Graham Kerr, CEO of South32, commented on the acquisition of the stake in MRN and on the exploration of bauxite in Brazil, thus stating that “We are happy to complete the acquisition of an additional interest in Mineração Rio do Norte, guaranteeing greater access to the bauxite to our integrated aluminum supply chain. This acquisition, integrated into the aluminum supply chain, will help boost local investment and increase local aluminum supply.” Lastly, South32 stated that MRN's production goes to the Alumar refinery, which has an annual capacity of 3 .5 million tons, as a way of guaranteeing production supply. In addition, the company highlighted its commitment to the Brazilian market and that this is just one more step taken in the domestic market.