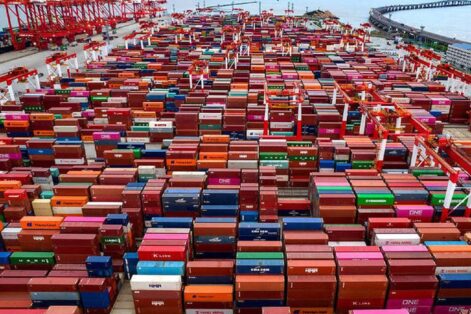 Containers in the port of Shanghai – image: getty images

Due to the Lockdown, generated by the worsening of the epidemic in China, the port of Shanghai, the largest in the world, prevents ships from loading or unloading, increasing global inflation.

O lockdown tax in Shanghai, a very important city in China, has delayed loading and unloading of ships from the port of Shanghai, biggest port in the world, causing an increase in inflation worldwide. The port was responsible for 17% of container traffic and 27% of China's exports. In 2021 alone, it handled 34 million TEUS of the 200 million containers handled by the country. the city is in lockdown about 4 weeks ago and this is due to the covid-zero policy, determined by the government, impacting the largest port in the world indirectly.

The chaos in the transport of goods is one of the main reasons for the high prices in several countries, considering that the supply of products decreases but the demand does not end.

According to the professor of finance and economics at NUI Shanghai, Rodrigo Zeidan, despite the port not having closed with the lockdown, the restrictions applied by the China they even prevent 90% from trucks taking loads to the site. Therefore, limited logistics prevent goods from being shipped abroad.

As a result, several ships end up stranded at the port of Shanghai waiting their turn to load goods or deliver to Chinese buyers. The result is that shipping companies are leaving the world's biggest port and heading to the next stop, most often in China itself. The port is operating at half its capacity and the consequences of this can be seen in the satellite images that accompany the ships.

What are the impacts of the lockdown on the port of Shanghai?

A delayed-effect bomb is being set up in the container market, which is expected to explode in June or July in various markets around the world. Much of the ship's cargo does not leave the world's largest port and the rest does not arrive in Mainland China.

If this effect continues and the authorities do not release ships to resume activities, the global cargo market will lock up and it will not be like during the pandemic when the wheel of the economy stopped and millions of cargo vaults were scattered.

At the end of last year, this wheel turned again and the price of leasing containers dropped drastically. But how lockdown, rose again and as there is no good news of the epidemic in the municipalities, fear has already spread to the giants of the ship market.

Alerts are emerging for the seriousness of the situation and for the fact that possible consequences have not yet been incorporated into the growth calculations of the world GDP by most economists, who still see the rise as temporary, generating a great scare ahead. However, some have already advanced on the subject and it is known that the first economy to be hit is China itself.

Swiss bank UBS reduced its estimate for China's gross domestic product for the year from 5% to 4.2%. Effect that distancing measures, such as lockdown, must have on economic growth.

The reasons for fear of a lockdown in China in the transport sector is also linked with the upcoming presidential elections. China will choose a new president in 2022 and it seems clear that the leader Xi Jinping will be reappointed for his third term.

Tags: Chinashanghai portPorts and Shipyards
previous post Petrobras informs that it receives only R$ 2.80 per liter of gasoline for each R$ 7 paid on average by the consumer, and readjustment in fuel prices is necessary so that the Brazilian market continues to be supplied, without the risk of shortages
next post Alesp exempts ICMS from components and equipment for the use of solar energy