Leading global vehicle manufacturer Toyota, boards Corolla flex-hybrid sedan, the first in the world to use flexfluel technology in an ethanol mission in India 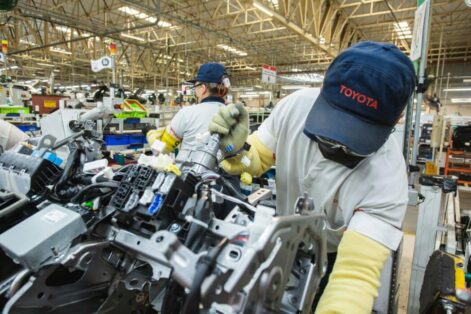 Toyota will be the representative of flex-hybrid technology in India, which has been producing in Brazil for more than two years

Toyota, the leading global vehicle manufacturer, this week shipped the Corolla flex-hybrid sedan – the first in the world to use this technology and produced in Brazil – along with a delegation of Brazilian government leaders, UNICA (União da Indústria de Cana-de-Canada). Sugar), from the automotive industry and national capital goods, aiming at building an integrated agenda to reduce emissions in the vehicular transport matrix in India, with an emphasis on biofuels and vehicles with flexfuel technology, used in Brazil for almost two decades.

Toyota Brasil is being represented by Roberto Braun, director of Governmental and Regulatory Affairs, whose mission is to show one of the most viable possibilities in terms of sustainable mobility: the hybrid flex technology, manufactured by Toyota on Brazilian soil in the municipalities of Indaiatuba ( SP) and Sorocaba (SP), with the Corolla sedan and Corolla Cross models, respectively, for more than two years.

According to the automaker, one of the main targets of the mission will be the signing of a memorandum of understanding between the countries for technical cooperation in the area of sustainable mobility.

Toyota is proud of its pioneering spirit and leadership in the electrification of the Brazilian automotive market. Since the arrival of the Prius in 2013, more than 50,000 of the brand's electrified vehicles have been sold. In 2022, Toyota's electrified models account for 56% of all sales of this type of car, according to data from Anfavea.

Also this year, Toyota do Brasil celebrates the third anniversary of flex-hybrid technology, introduced in an unprecedented way in the world, through the launch of the 12th generation of the Corolla sedan, in September 2019. Since then, sales of Toyota models that offer the unprecedented powertrain exceed 35,000 units by March 2022.

This volume of hybrid flex vehicles helped to prevent approximately 10,800 tons of CO2 from being emitted into the atmosphere. The reference value was taken from the vehicle emissions report for the State of São Paulo, issued by the CETESB, which considers the following scenario: percentage of gasoline consumption used by flex-fuel vehicle owners/users (which is equal to 40%) and average annual mileage traveled by them (from about 13,000 km to 14,000 km per year)