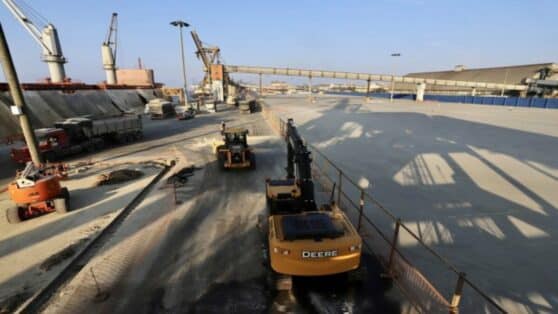 Klabin plans to complete works on the terminal in Porto de Paranaguá to continue with its activities and handling of cargo with cellulose. Source: Disclosure

The construction works of the new cargo terminal at the Port of Paranaguá, managed by the company Klabin, should be completed this year and, as a result, cargo handling operations focused on cellulose may begin

The pulp production company Klabin has been carrying out works for the construction of a new cargo handling terminal at the Port of Paranaguá. Last Thursday, (14/04), it revealed that the works should be completed during the beginning of the second half of 2022. And with that, the pulp export operations can be started later this year, according to projections from the company.

Video: Check out the historic moment when Klabin leased an area in one of the Ports of Paraná

Construction work on Klabin's cargo handling terminal at the Port of Paranaguá will be completed in 2022, according to the pulp company's projections

Klabin, a giant in the field of pulp production in the national territory, commented this past Tuesday on the deadline for completion of the construction of its new terminal at the Port of Paranaguá and stated that the works should be concluded at the beginning of the second half of the year. year 2022, so that cargo handling operations focused on this product be started already after delivery of the terminal.

The investment made by the pulp manufacturer Klabin is budgeted at around R$ 120 million, with an industrial unit in Telêmaco Borba, in Campos Gerais and, after the start of works in June 2021, the delivery of the terminal is getting closer. Klabin's new terminal has an area of 27,530 square meters and was acquired by the company in an auction held by Portos do Paraná in August 2019, with a contract scheduled for an initial 25 years, which can be expanded by up to 45, if the company wishes continue with the administration of cargo handling activities.

After two decades without new concessions within the Port of Paranaguá, the concession and delivery of the area being used for Klabin's new terminal was carried out during 2020 and, until 2021, the company sought all licenses necessary for the start of the works. Now, Klabin is getting closer and closer to starting its new commitment to cargo handling with a focus on exporting pulp directly from the national territory.

According to data from Klabin's Director of Operational Planning, Logistics and Supplies, Sandro Ávila, the construction works for the company's new terminal at the Port of Paranaguá are well advanced for the initial schedule. Thus, one of the main structures for operations, the external rail access, is practically completed, with a new slope crossing Avenida Portuária and the next steps are already well underway at the location.

As a result, the president of Portos do Paraná, Luiz Fernando Garcia, comments on the importance of developing new cargo handling operations at the port and states that “Klabin, a large company, expects this efficiency to be reflected in a commercial advantage. Our obligation is to collaborate in the development of the work and ensure that operations are carried out as efficiently as possible, whether they are receiving cargo by land or boarding the ship”.

The current phase of construction is counting on 180 workers and, as a result, the project to build the new terminal focused on pulp exports has contributed to ensuring more employment opportunities for residents of the Port of Paranaguá region.

Tags: loadscelluloseklabinConstructionPort of Paranaguá
previous post Hurb Labs develops innovative project to use autonomous ship in Rio de Janeiro
next post Discover the Federal Government's collection machine that will generate more than R$ 500 billion for the public coffers and little known by Brazilians