Ibama releases Shell to drill five wells, cities in the interior of Rio can gain base from the company 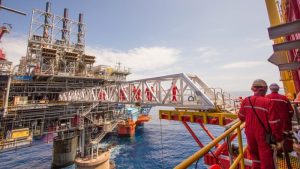 Shell is already preparing offshore units and support vessels to carry out the activities, Rio and inland cities will have a logistical and support base.

[supsystic-social-sharing id='1′]A shell is licensing at IBAMA to drilling of five pre-salt wells, two in the South Gato do Mato block, in the Santos Basin, and another three in the Alto de Cabo Frio Oeste block, in the Santos Basin. Last week, the oil company signed contracts for sharing production in the areas and began licensing processes the following day. The company intends to start drilling campaigns in January 2019.

In the Alto de Cabo Frio Oeste block, Shell is licensing the drilling of up to three exploratory wells. It will use a drillship with dynamic positioning and two PSV-type vessels, with a forecast of approximately 15 trips per month. The logistical base for primary support is not yet defined, but will be carried out in the city of Rio de Janeiro or Niterói (RJ). The company can use Porto do Forno, in Arraial do Cabo (RJ), for secondary support; the Port of Açu, in São João da Barra (RJ) or the Port of Vitória (ES).

The aerial support will be carried out at Jacarepaguá airport, in Rio de Janeiro (RJ), with the possibility of eventual use of Cabo Frio, Macaé or Campos airports. The campaign in Alto de Cabo Frio Oeste should start in April 2019, to last 120 days.

In the South Gato do Mato block, in the Santos Basin, which is a southern continuation of the BM-S-54 block, two wells are being licensed with the main objective of acquiring additional information about the reservoir discovered in BM-S-54. A training test is also planned. The logistical base for primary support to the activity is not yet defined, but – as in the Alto de Cabo Frio Oeste campaign – it will be carried out by Rio de Janeiro or Niterói (RJ). The drilling campaign is expected to begin in January 2019 and is expected to last 150 days. Source E&P Brazil