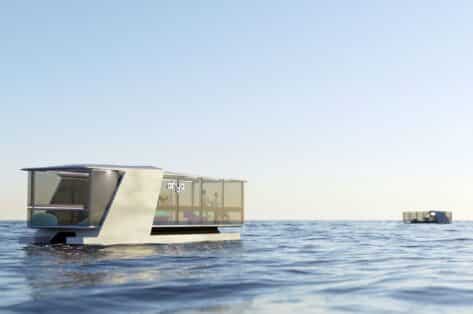 A non-polluting urban mobility vessel should set sail for its first trips in December this year – image: Portos e Navios

The online travel platform Hurb Labs, part of Hurb, has partnered with TideWise, a Brazilian technology-based company that provides maritime solutions, for the development of an innovative project using autonomous and ecological ship technology. The new transport, which will transport passengers through the water channels of the Rio de Janeiro, is expected to be ready in December this year. The new partnership between the companies also aims to explore some waterway routes in the city to connect tourist attractions and significant hubs, such as the Center of Rio, Pão de Açúcar, the Peninsula in Barra da Tijuca and the Jardim Oceânico subway station.

The ship of the online travel platform was named “Arya”, synonymous with essential and noble, referring to the values of the Hurb. The term is also linked to air and is a special tribute to the Hurb's mascot.

The autonomous vessel uses laser sensors, camera and radar systems so that it can move safely, sharing the same waterways as common ships in Rio de Janeiro. In addition, they can operate in various weather conditions, carrying various sensors that collect data from the environment. The vehicle communication of the online travel platform is carried out via 4G, satellite or radio link with a range of up to 18 km, allowing the operator to control and monitor the autonomous vessel in real time.

According to the founder and co-CEO of Hurb, João Ricardo Mendes, the company is very excited about the project in Rio de Janeiro. Transport by waterway can bring a creative and flexible experience, with navigation in the midst of the nature of the lagoons of Barra da Tijuca. In addition to convenience, the initiative is sustainable, being able to draw attention to the issue of environmental preservation through the visibility that the company expects.

For the creators, the autonomous ship will be a new option for urban mobility that can contribute to the time of several people and compose an existing network.

According to Rafael Coelho, a naval engineer specializing in autonomous vessels and CEO of TideWise, the company and the online travel platform are applying all their Brazilian and international work experience to make passenger transport safer, collaborating with the Brazilian Navy. for the development of the first provisional regulation for this type of vessel. The proposal is in line with what is done around the world, and there is a global consensus for similar regulations.

Understand how the autonomous vessel system will work

For now, the vessel will transport the employees of the online travel platform in Rio de Janeiro, on the passenger route between the Peninsula, where the company is headquartered, and the Jardim Oceânico subway station, in round trips with a duration of 20 minutes with capacity for 15 people.

The system will be fully electric, therefore it will not emit polluting gases. Solar panels will be installed both on the ship and on the docking pier, which will be used as a charging station, helping to charge the batteries, further reducing the environmental impact.

In addition, the online travel platform's autonomous ship will use artificial intelligence to detect pollution and oil in the water during voyages, thus assisting regulators in environmental control measures.

Tags: travel platformRJ - Rio de Janeiro
previous post Entity warns of an increase of up to 40% in electric car batteries due to raw materials
next post Klabin should start cargo handling operations with a focus on pulp at the new terminal at the Port of Paranaguá in 2022