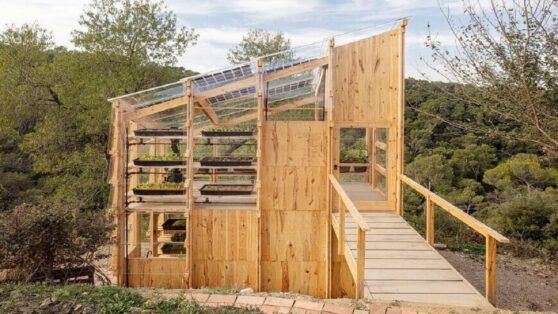 The solar greenhouse seeks to be a model for new ways of adapting to modern life – image: Ciclo Vivo

Students in Spain have developed a greenhouse capable of producing solar energy and generating its own food. The project is just a prototype and there are already projections that a greenhouse 10 times larger will be developed.

In the 19th century, the popularization of greenhouses innovated the way food was grown and currently, greenhouses can maintain constant temperatures throughout the year, being ideal for food to be grown in places with a more severe and not so favorable climate. Their only problem is that they use up a lot of energy. With that in mind, a group of architecture students from the Spanish city of Barcelona, developed a prototype of a greenhouse capable of producing solar energy, growing their own food.

The solar greenhouse developed by the students was installed in the Sierra de Collserola Natural Park and was built with pine wood quite common in the region. The environment has 12 square meters and is on a small lot next to a self-sufficient habitat research center, called Valldaura Labs.

Although the greenhouse capable of producing solar energy is situated in a green area, the concept can be built on urban roofs and terraces and refugee camps, where there is a great shortage of food and electricity.

The greenhouse was created during a master's program at Institute for Advanced Architecture of Catalonia (IAAC). The students resided on campus for a year and developed the solar-powered environment that spans two floors. It took the students just two months to build the prototype. The execution of the project was led by the architects Daniel Ibáñez and Vicente Guallart.

In 2014, Vicente Guallart wrote a book known as “The Self-Sufficient City”. At the time, he was the city's chief architect and advocated that buildings should be more productive and that Barcelona should autonomously produce energy and food locally.

In many ways, the greenhouse that generates solar energy is an interpretation of Vicente Guallart's philosophy. The structure of the environment, created by the students, is divided into two floors: the plants germinate downstairs and continue to grow upstairs.

To contribute to the capture of sunlight during the day, a glass roof was built, while Ultraviolet and LED light contributes to the production of lettuce, eggplant and tomato at night.

The roof features solar panels in a checkerboard pattern, while the back and front windows can be opened for natural ventilation. A nutrient-enhanced irrigation system also contributes to boosting plant growth within the solar greenhouse.

Both the LED panels and the irrigation system are powered by solar energy panels. The greenhouse uses only about half of the energy that is generated, which left the other half for other nearby Valldaura Labs facilities. Guallart claims that it would be possible to cover the entire roof with solar panels and there would still be 75% of energy left over, however, financial reasons made this difficult.

In September of last year, the prototype capable of producing energy was completed and the team is already designing a greenhouse that can be 10 times bigger, which will be installed on the roof of the tallest wooden building in Barcelona. For students, the main objective is to develop communities that can grow their own food and produce their own energy.

Tags: electricityRenewable energySolar energystudents
previous post Gasoline and ethanol prices increase by more than 2% in April and consumers have nowhere to run
next post After Ford, Volkswagen and Toyota, it's time for Honda to announce ambitious 8 trillion yen plan to manufacture 2 million electric cars a year and displace global leader Tesla