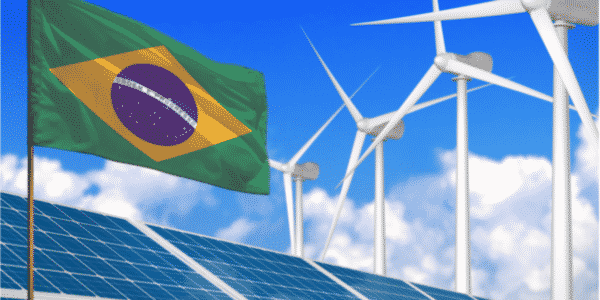 In an area of 2,000 hectares, the giant green energy project in Brazil has a wind farm and a solar farm, which will produce 3,000 GWh/year

Brazil Green Energy (BGE), one of the largest renewable green energy projects in Brazil, is almost becoming a reality and should require an investment of 6.5 billion reais. Led by Fernando Vilela, the CEO of Maturati Participações and experienced in the energy sector, the project is a hybrid and includes the construction of a solar park with power to produce 821 megawatts (MW) and a wind farm with a production capacity of 231 MW

In addition, the green energy project in Brazil will also include six Small Hydroelectric Power Plants (SHPs) in the state of Mato Grosso, in addition to studies for the development of a plant for the production of Green Hydrogen.

According to findings made by NeoFeed, the two Brazil Green Energy parks, which will be built on a 2,000-hectare sector in the city of Areia Branca, in Rio Grande do Norte, have been attracting the interest of large companies in Brazil, China, Canada and Portugal.

According to the exclusive article written by Carlos Sambrana, an executive at the M&A boutique OBB Capital, responsible for raising funds and discussing with investors, is on the European continent to present Brazil's green energy project to several companies. Green energy innovation was being kept under wraps as those in charge were looking for all the necessary permits.

What has caught the attention of investors?

In this sense, the main factor for attracting investors from Brazil and abroad is this issue: the licenses already granted. The green energy park already has Installation Licenses, also known only as LIs, approved and issued by the National Electric Energy Agency (Aneel), by the Government of Rio Grande do Norte – state that is a reference in wind energy – and by other environmental agencies. These are licenses that need approximately 6 years to obtain. In addition to this aspect, Brazil Green Energy presents totally clean energy, with solar, wind and hydrogen sources, taking into account the ESG movement.
At the moment when the wind and solar parks of green energy in Brazil are in operation, the production of completely renewable green energy will be able to reach 3 thousand gigawatt hours per year (GWh/year), which corresponds to more than 50% of the total consumed by the entire state of Rio Grande do North.

Renewable energy: Brazil reaches sixth place in the world ranking of wind energy potential and has excellent results with the solar source

Published on Monday, April 4th, the report by the Global Wind Energy Council (GWEC) details and analyzes in a complete way the scenario of the global wind energy sector. As shown by the Brazilian Wind Energy Association (Abeeólica), it is seen that Brazil rose one position in the Ranking of Total Installed Capacity of Onshore Wind Energy in 2021, now occupying sixth place. In 2012, Brazil was in 15th position, and last year it was consecrated the third country to install more wind power plants, according to the GWEC.