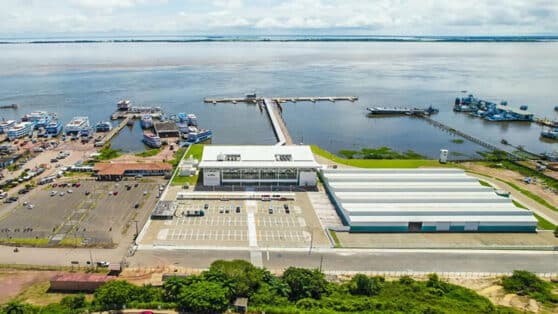 After the completion of the infrastructure works with an investment of R$ 74 million made by the government of Pará, the Santarém terminal is now able to serve large vessels for the transport of cargo and passengers

The Santarém waterway terminal was delivered to the population last Wednesday, (20/04), and marked a great advance towards a quality infrastructure in the transport of cargo and passengers in the place. The total investment by the Government of Pará was R$ 74 million and the works ensured a highly safe and efficient infrastructure to serve large vessels throughout the operations at the site.

Investment of R$ 74 million by the Government of Pará in the Santarém waterway terminal guaranteed the necessary infrastructure for safer cargo and passenger transport, in addition to receiving larger vessels

Located on the banks of the Tapajós River, the Santarém – Joaquim da Costa Pereira Waterway Terminal for Passengers and Cargo, in the Lower Amazon, was handed over to the population during an opening ceremony. The total investment by the state government is budgeted at R$ 74 million and the infrastructure works in an area of 22 thousand square meters now allow a total of three thousand passengers a day, in addition to serving large vessels for the transport of cargo and the population.

In addition, as part of the package of infrastructure works that was carried out, 1,205 long chairs, free wi-fi network and two escalators were installed in the departure lounge of the terminal, as a way of ensuring greater accessibility for PCDs who need access to the terminal. . The site also now has a parking area covering 5,800 square meters that includes parking spaces for cars, motorcycles and bicycles, as well as taxi and bus stops, a project completed after the government's millionaire investment.

Another main focus of the infrastructure works project at the terminal, in addition to making it suitable for passengers, was the development of an adequate structure for the transport of cargo in large vessels. Thus, the cargo terminal now has a shed with more than six thousand square meters used both for the storage of products for sale and for passengers to have the possibility to store their belongings. The infrastructure works at the site also ensured more than 800 jobs directly and indirectly for the residents of the state, contributing to local development.

One of the main problems that the state of Pará has in terms of the waterway modal is the lack of an adequate infrastructure to serve large vessels in the transport of cargo and passengers. However, the delivery of the new Santarém terminal guarantees a structure completely designed to receive large vessels, such as cruise ships, which must enhance tourist activity in the region, generating employment and income, in addition to enabling the flow of products.

In this way, José Roberto Branco Ramos, president of the Commercial and Business Association of Santarém (ACES), commented that “It will bring more dignity to the people of Santarém and will improve the control of goods. It is something revolutionary that the municipality receives. A historical and strategic work. It was something we've needed for a long time. The terminal will make a huge difference to people. The municipality is one of the main hubs in the region in the transport of passengers and cargo”.

The Santarém Passenger and Cargo Waterway Terminal – Joaquim da Costa Pereira will be the ninth port delivered in the region and the Government of Pará intends to continue with an investment plan aimed at this segment in the state, as a way of guaranteeing an improvement in the quality of life. of the residents and an economic movement of the state.