Goodyear starts making tires with soy oil instead of petroleum 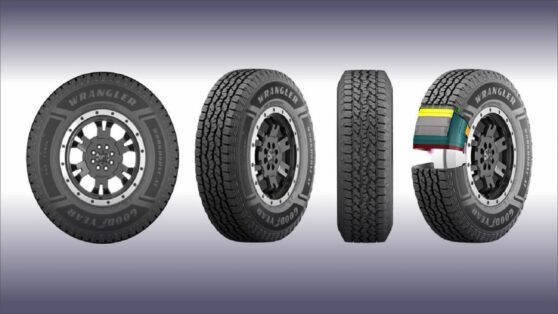 Goodyear's soybean oil tires were officially launched in 2017 and will finally be produced 100% in Brazil, later this year 2022.

On Monday, the 9th, Goodyear announced the launch of the tire Wrangler Workhorse AT, which will be manufactured in the city of Americana, in São Paulo, to be equipped exclusively in pickup trucks and SUVs that are sold in Brazil. This great news from Goodyear is not related to improved performance compared to its predecessor, the Wrangler Armortrac, or even related to mileage, handling in wet conditions and, above all, better traction on all types of terrain. , but, as promised by the manufacturer Goodyear, it is related to a specific element, which makes up the manufacture of the product, that is, the soy oil instead of oil.

Launch of Goodyear's Wrangler Workhorse AT tire, one of the components in its manufacture, soy oil, replacing petroleum

Soybean oil, of vegetable origin, has the function of replacing petroleum derivatives in the chemical composition of the tire, for reasons of sustainability and also for optimizing its performance, taking into account that consumers have given increasing importance to environmental issues. , as the preservation of the environment has been greatly reinforced in recent times, according to the release note released by Goodyear.

According to Debora Da Cruz, Senior Marketing Manager of Goodyear's Passenger Tire Division, the Wrangler Workhorse AT strain is the first 100% produced for Latin America, using soybean oil as an unprecedented compound, bringing better performance and much more sustainable to tires.

Goodyear tires, made for any terrain, have already won an environmental award

Considered to be a mixed-use tyre, that is, that supports transit between urban and off-road terrains of a lighter character, Goodyear's Wrangler Workhorse AT is not only the most ecologically correct, but also, according to the manufacturer, It has a much better performance, at different temperatures, compared to its predecessor model, not to mention that the Wrangler Workhorse AT has greater grip, due to the use of soy oil, instead of petroleum in its composition.

According to Goodyear, using the Wrangler Workhorse AT, it underwent laboratory tests, showed 20% greater durability and about 4.6% in terms of improved fuel consumption, compared to the Wrangler Armortrac.

In terms of preventing aquaplaning when cornering, the new Goodyear tire achieved a 22% higher result, managing to outperform the predecessor model by 4% in terms of braking on the ground and/or wet terrain. Its structure has much wider blocks and a larger groove cavity, with the main objective of optimizing off-road performance and facilitating water drainage.

The Wrangler Workhorse AT made without petroleum and with soybean oil as a substitute will be available in about 20 sizes and between 15 and 20 rims. Goodyear created and produced the line of tires with soybean oil, and presented its invention in 2017, in Germany, and debuted the first strain effectively in 2018, in the United States. Returning to Germany, Goodyear managed to win an environmental award for having created the soy oil tire.

Founded in 1833 by Charles Goodyear, the tire manufacturer has been in the market for over 100 years, always interested in innovating and creating new ways to help mobility. Goodyear not only made tires for conventional vehicles, but also the tires that landed on the moon.

Goodyear is among the largest tire manufacturing companies in the world, with around 72,000 employees in 57 facilities in 23 countries around the world.

In addition, Goodyear has two Innovation Centers, in Akron, Ohio and in Colmar-Berg, Luxembourg, where new technologies are developed and the performance of its lines improved for the industry. Goodyear has other sub-brands, namely: Fulda, Sava, Debica, Dunlop and Kelly Tires.

Tags: oil derivatesgoodyearsoy oilPetroleum
previous post Representative of the United States government requests that Petrobras increase its oil production, but the request is denied by the state company
next post After a new increase in the price of diesel, truck drivers start a strike in Espírito Santo with no return forecast