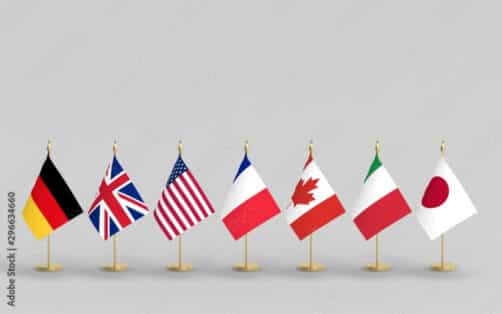 The G7 is committed to eliminating Russia's oil imports, the White House said in a statement on Sunday.

For the White House, the G7's attitude of depriving Russia of oil imports will have a negative impact on President Vladimir Putin's economy and deprive him of the necessary funding to support his war effort.

The statement issued by the White House, regarding the ban on imports of oil from Russia imposed by the G7, does not specify the commitments made by the members of the G7, which are France, Canada, Germany, Italy, UK, Japan and U.S, which took place this Sunday, 08. The third meeting of the year, held by the G7, was in videoconference format and had the participation of Volodymyr Zelensky, President of Ukraine.
The choice of the day for the G7 meeting, to discuss the deprivation of oil imports from Russia, is very symbolic, as Europeans celebrate the end of the Second World War in Europe on May 8 and, also, on the eve of a military demonstration in Russia on May 9, when the Soviet Union defeated Nazi Germany.

Measures taken by the G7

The Western G7 countries have so far shown very close coordination in their announcements of sanctions against Russia's capital Moscow. However, they do not advance at the same pace when it comes to russian oil and gas. The United States, which was not Russia's biggest oil buyer, has already banned its imports. European Union Members participating in the G7, pressured to implement the measure, continue this Sunday, 08, intense talks and meetings to establish an impediment to Russian oil, as the EU depends heavily on Russia.

The EU has been negotiating with some of its member countries for the chance to be able to delay further oil embargoes from Russia, as many EU countries are heavily dependent on Moscow's oil.

For the Hungarian prime minister, Viktor Orbán, the ban on oil imports would bring great economic damage to the countries of the European Union. Hungarian Chancellor Peter Szijjarto also reported that it would be a great challenge to operate the country's economy without oil from Russia.

US announces new sanctions against Russia

The United States established new measures against Russia. Such measures affect the media and the access of companies and large Russian resources in the consulting and accounting activities, both of the United States and the British, the great specialists of the world.
With the inclusion of Channel One Russia, the television station Russia-1 and the NTV Broadcasting Company, Washington prohibits any US company from financing Russian stations through advertising, marketing or even the sale of equipment.
According to a White House official who requested anonymity, no US company should be involved in funding Russian advertising.
Other measures taken by the United States were the closure of auditing, administration, consulting, marketing services, all resources used to manage multinational companies, and also the ban on importing oil from Russia. These measures were taken with the aim of avoiding sanctions or hiding improperly acquired wealth, reports the same source.

The source also pointed out that, although Europeans have close labor relations with Russia, the United States and the United Kingdom, on the other hand, they dominate the entire services sector, namely the “Big Four”, the four pillars of auditing and consulting. world class, they are EY, Deloitte, PwC and KPMG.

Washington also announced new limitations on US exports to Russia of all major products from excavators, oil to ventilation systems and boilers.
It also established and imposed visa restrictions on around 2,600 Russian and Belarusian citizens, as well as sanctions against employees of Sberbank and Gazprombank.

Tags: ImportOil, Oil and GasRussia
previous post Brazilian mining company Vale and Tesla, owned by Elon Musk, make official nickel negotiations to increase production of batteries for the automaker's electric vehicles
next post The future of refining in Brazil: Discover the 5 refineries with ongoing projects that could lower the prices of gasoline, diesel and other oil products