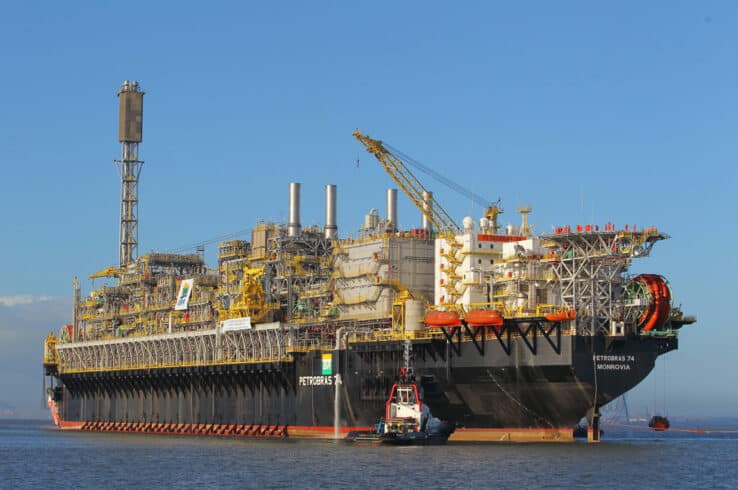 After 9 days of travel from the EBS shipyard, the P-74 arrived at its destination and is getting ready to connect to the wells in the field and start producing oil and gas this semester.

The platform represents a boost in Petrobras' oil and gas production. The FPSO P-74 arrived at the Búzios field, in the Santos Basin, and should start operations by the month of June. The characteristics of the production platform are similar to platforms already in operation in other fields in the Campos and Santos basins. It will be connected and will produce 9 wells. Petrobras has seven platforms scheduled to start operating this year in Brazil.

The Búzios field will go into production less than eight years after the transfer of rights agreement was signed and the P-74 is included in the first definitive production system in the area under this agreement. Another four production units are scheduled to integrate this field: P-75 and P-76 (for the second half of this year); P-77 (2019) and Búzios 5 (2021). Each platform will be able to process up to 150,000 barrels of oil and 7 million m3 of gas daily.

When the entire production system in the Búzios field is in place, it will add a total of 750,000 barrels of oil and 35 million m3 of gas per day to the company's already installed production capacity. These projects will jointly produce the volume contracted in the Transfer of Rights for the Búzios field, which is very significant for the company's objective to achieve Brazilian self-sufficiency.

Consequently, in the next two years many job opportunities will arise in all areas, mainly in the technical, operational, miscellaneous maintenance and nautical areas. Stay tuned and be sure to follow our publications because we will announce vacancies and hiring companies whenever we have news.