FPSO Guanabara MV31, the largest platform of its kind ever built by MODEC, reaches the first oil in the pre-salt and starts the 22-Year Charter Tempo with Brazilian oil giant Petrobras 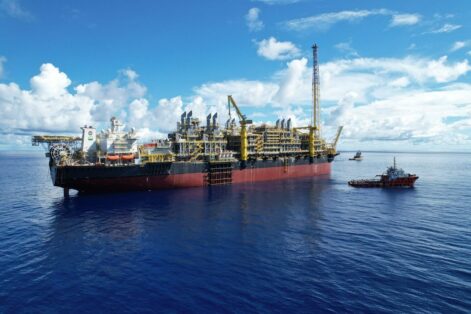 MODEC currently operates 11 units in Brazil and has another three (3) under construction for the country, namely the FPSO Almirante Barroso MV32, the FPSO Anita Garibaldi MV33 and an FPSO for Equinor's Bacalhau project.

MODEC announced today (05/06) that the FPSO Guanabara MV31, deployed for operations in the Mero field, in the massive “pre-salt” region of the Santos Basin, off the coast of Brazil, reached First Oil Production and began charter services on May 1, 2022. It is the largest FPSO built by the company to date.

O FPSO is leased with a 22-year charter contract to Brazilian oil giant Petrobras. MODEC was responsible for the engineering, procurement, construction and deployment of the FPSO, including state-of-the-art processing equipment, as well as hull and marine systems. SOFEC, Inc., a MODEC group company, designed and supplied the FPSO's spread mooring system.

This is the 14th FPSO vessel that MODEC has delivered to the Brazilian oil and gas sector, as well as MODEC's 7th FPSO in the “pre-salt” region. THE FPSO Guanabara MV31 is designed to re-inject 100% of the processed gas back into the oil well.

Currently, the MODEC operates 11 units in Brazil and has another three (3) under construction for the country, namely, the FPSO Almirante Barroso MV32, O FPSO Anita Garibaldi MV33 and an FPSO for Equinor's Bacalhau project.

“MODEC is proud to have the opportunity to play a role in Brazil’s growing oil production market and to support our long-time partner’s mission to accelerate oil and gas extraction in the pre-salt polygon,” he said. Soichi Ide, President and CEO of MODEC Offshore Production Systems (Singapore) Pte. Ltd. (“MODEC Singapore”). “This being our 7th pre-salt FPSO, we fully understand the intricacies of deepwater development and the technical difficulties of pre-salt production, and have adapted our vessels to overcome these challenges.”

The ship is the third one operated by MODEC to start production in recent months. In August 2021, the company began operating the FPSO Carioca MV30 in the Sépia field, also in the “pre-salt” region of the Santos Basin, and in February 2022, the production of FPSO MIAMTE MV34 in the Gulf of Mexico.

Tags: ModecPetrobrasplatforms
previous post Oil and natural gas production shows growth in Brazil, with the pre-salt responsible for most of the productivity in barrels of oil equivalent
next post Brazil is self-sufficient in oil but not in derivatives and faces a risk of shortages and shortages of gasoline and diesel fuels