Federal Government will cede cargo handling area from the Port of Cabedelo to Docas da Paraíba, aiming to reverse the capital raised in investments for the infrastructure of the place 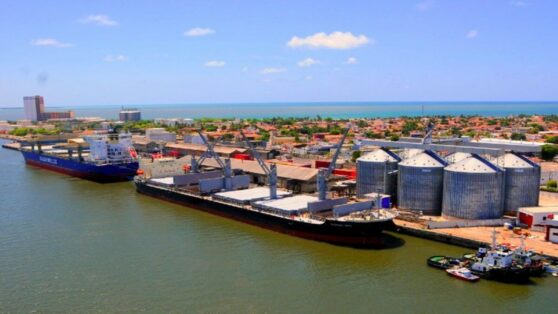 Docas da Paraíba will have an area in the Port of Cabedelo so that infrastructure improvements can be carried out. Photo: Portal do Agribusiness

The Secretary of Governance and Heritage of the Union - SPU held a meeting with representatives of the port sector last Tuesday, (19/04), for the concession of an area of the Port of Cabedelo to the company Docas da Paraíba. In this way, the Federal Government intends to carry out infrastructure works for the movement of cargo at the port, with the conversion of the amount collected into investments to be applied in the plan.

The Port of Cabedelo, located in the state of Paraíba, is one of the biggest movers in the region's economy and, in 2021 alone, handled around 1.3 million tons of goods such as fuels, grains and coke in cargo. of petroleum (petcoke), thus guaranteeing a socioeconomic development even greater for the entire state and achieving its presence within the cargo handling segment in Brazil.

Thus, the Federal Government, through the SPU, found a great opportunity for growth and expansion of these activities in the area and announced that it will grant an area of the Port of Cabedelo owned by the Union, which has been processing for almost 20 years a process to regularize the use of the space for the company Docas da Paraíba, as a way to obtain a large monetary collection, since the space occupied in the port is valued at more than R$ 160 million.

In this way, the contract between the bodies will take into account the ordinance of the Special Secretariat for Privatization, Divestment and Markets of the Ministry of Economy, No. 7,397, of June 2021, and will be used as a basis for investments in the port. This means that the Federal Government will collect all the monetary collection in the transaction and will transform it into a new investment package for infrastructure works at the port, ensuring better quality for cargo handling operations and, consequently, further expanding the port's presence on the national scene.

Ceremony for the concession of the area will take place soon, and SPU is very optimistic about the infrastructure investment plan in place.

Since 2020, the SPU has been making a series of changes to the rules of the Port of Cabedelo in order to reduce bureaucracy in the place and, consequently, reach an agreement with Docas da Paraíba for the concession of the cargo handling area. Now, the company will be able to carry out the local collection and, with this, the Federal Government will obtain the necessary resources to carry out investments in infrastructure works.

Thus, the SPU superintendent in Paraíba, Arthur Navarro, commented on the need for this agreement and its relevance to the current scenario of the Port of Cabedelo and stated that “Instead of being destined for the Union, these amounts will be reinvested in the port itself, favoring its modernization and qualification, increasing its competitive potential and, consequently, providing local economic development”.

The ceremony for the delivery of the Porto de Cabedelo area to Docas da Paraíba will take place next Tuesday and should be attended by the Minister of Infrastructure, Marcelo Sampaio; the National Secretary of Ports (SNPTA), Diogo Piloni; the Assistant Secretary for Coordination and Governance of the Union Heritage (SPU), Martim Ramos Cavalcanti and the director of the Department of Port Management and Modernization of the National Secretariat of Ports (SNPTA).

Tags: Paraíba docksFederal governmentinfrastructurecargo handlingport of Cabedelo
previous post EIB will provide more than US$ 650 million to Enel for investments in the development of renewable energy projects in Brazil, Peru and Colombia
next post Multinational Komatsu is recruiting professionals to participate in selection processes and compete for available job openings in the civil construction segment