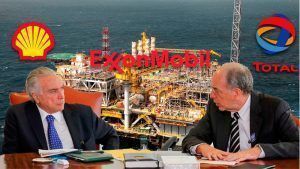 Published on April 26 in the form of a decree by President Temer, Petrobras now has a green card to sell its assets with the approval of the government

Now there's no turning back Petrobras, the current president of Brazil, Michel Temer, ended up launching yesterday(26) the authorization decree that aims to establish the rules of governance, transparency and good practices for the sale of Petrobras fields and exploratory blocks. The TCU had embargoed the state-owned company in 2017 and demanded it make adjustments to its divestment plans. Well, having done what the Federal Court of Auditors asked, the projects passed and Temer “penned in an express way”.

In all, 28 projects and 105 exploratory fields will be delivered to private initiatives, most of which are onshore fields, in addition to partnerships in which Petrobras will no longer be a majority partner. Here are some of the main divestments:

Since last week, the climate has been hot among the oil union movements that are against the sale of state-owned assets to the private sector. For example, the sale announced by Pedro Parante of 4 refineries in the South and Northeast of the country. They are also organizing themselves through assemblies to interrupt activities on oil platforms through assemblies, the decision will be made between April 30th and May 12th.