per Junior Aguiar
-
–
in Wind Energy 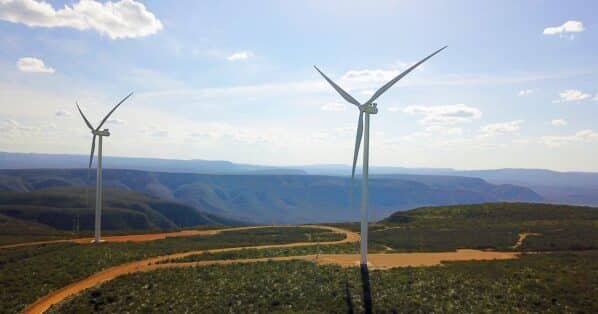 The works on the project began at the height of the Pandemic, with an investment of approximately R$ 430 million | Image: Enel Green Power

The company Enel Green Power in Brazil, one of the leaders in the production of renewable energy on the planet, announced the start of commercial operation of the Fontes dos Ventos II wind farm. The works on the project began at the height of the Pandemic, with an investment of approximately R$ 430 million. The project is located in the quiet town of Tacaratu, in the Sertão of Pernambuco, more than 415 kilometers from Recife and has 99 MW of installed wind energy capacity.

The Fontes dos Ventos II wind farm is located in the same region where Enel Green Power has been operating since 2015. It was there that the company built the first hybrid solar and wind farm in Brazil, which already totaled 89.9 MW, combining the Fontes projects. dos Ventos I and Fontes Solar.

The new wind farm in Tacaratu contains 18 wind turbines that can produce more than 421 GWh of energy per year, according to Enel Green Power. This helps to avoid the emission of 230 kilotons of CO2, in addition to avoiding the purchase of 97 million cubic meters of gas per year. Thus, promoting a sustainable economy and contributing to a cleaner world.

“This new project illustrates Enel Green Power's permanent contribution to the expansion of renewable sources in the country in recent years. We are expanding our installed wind power capacity in a region where we have been present for years. It was a project that generated important learning for the company and for other agents in the sector, in order to allow the study of opportunities for the complementarity of sources and encourage the regulation of associated projects”.

The electricity produced at the Fontes dos Ventos II wind farm will be supplied to the free market. Enel Trading, the group's trader in Brazil, will make sales to commercial customers.

In July 2021, the Enel Green Power and Lojas Renner established a partnership for 170 stores and a distribution center for the fashion retailer to be powered with the energy generated in the new Fontes dos Ventos II wind farm. The supply contract is for 15 years.

Lojas Renner also has contracts with Enel Green Power to have access to international renewable energy certificates, which attest to the origin of the energy provided for in the agreement.

The total volume provided for in the contract with Lojas Renner is an average of 11.3 MW, which is equivalent to a consumption of 100 GWh/year, according to the global energy producer.

In Brazil, the Enel Group has more than 4.7 GW of renewable installed capacity, of which more than 2.1 GW is from a renewable source. wind, about 1.2 GW are from solar sources and about 1.3 GW from hydropower.