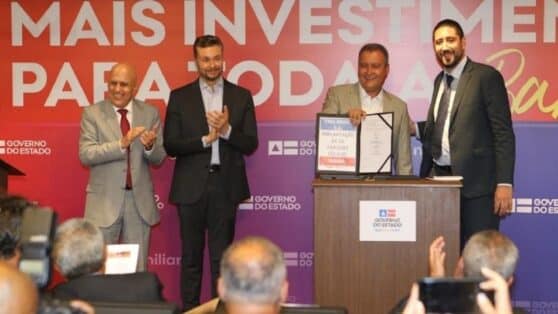 Enel Brasil and the Government of Bahia sign a Letter of Intent – image: Disclosure

Enel Brasil signed an agreement with the Government of the State of Bahia for the construction of future green hydrogen projects. This is the first document signed by the company for projects of this kind in Brazil.

Enel Brasil and the Government of the State of Bahia signed on Tuesday (12/04) a Memorandum of Understanding to carry out feasibility studies of projects for the production of green hydrogen in the state, by Enel Green Power Brasil, a renewable energy from the Enel Group. The studies will evaluate the technical, financial and commercial sectors for the enterprise. The partnership with the Government of the State of Bahia has the mission of joining forces to analyze the premises that influence the feasibility of projects for the production of fuel in the state, encouraging the future advancement of the entire chain in the region. Enel Brasil's memorandum with the government is for one year and can be extended.

According to the results of the feasibility studies in Bahia, the company will define, through its business strategy and based on technical criteria, potential projects, deadlines for execution and also the value of its investments.

According to Roberta Bonomi, who is in charge of the Enel Brasil project, the company believes in green hydrogen as a great complementary strategic tool for decarbonization to be promoted, especially for specific activities of the economy, which for economic and specific reasons, cannot use electrification through renewable sources such as green hydrogen in their production processes.

The executive highlights the case of the chemical industry, which has a large presence in Bahia. Currently, Enel Brasil is the largest wind and solar energy operator in Brazil and plans to play an important role also in the green hydrogen market in the near future, generating many jobs and opportunities for economic and social development.

According to Bonomi, Brazil is already a power generation renewable energy and Enel Brasil believes that the production of hydrogen based on totally clean energy will be a major competitive advantage for the country in terms of production costs in relation to this technology.

The memorandum of understanding with the government of the state of Bahia is the first of its kind signed by the company in Brazil and is part of the company's global efforts to promote the economic and technical feasibility of this type of solution in the countries in which it operates.

Enel Green Power builds and operates clean energy plants worldwide and is present in Europe, Africa, the Americas, Oceania and Asia. A world leader in renewable energy, with a total capacity of approximately 54 GW and a generation mix that includes solar, wind, hydro and geothermal energy, as well as energy storage facilities.

Get to know Enel Brasil

Enel Brasil is the largest private company in the electricity sector in Brazil and plays a leading role in the development of renewable energy sources in the country.

The company operates throughout the energy chain with activities ranging from energy generation to energy sales. Through its four distributors in Rio de Janeiro, Goiás, Ceará and São Paulo, the company takes energy to 18.3 million residential, rural, commercial, industrial and public sector customers. In the generation sector, the company is also the largest solar and wind energy company in the country, managing a total renewable capacity of more than 4.3 GW.