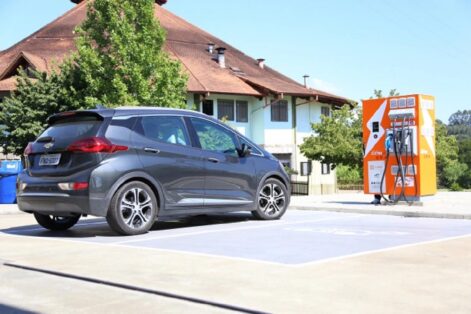 With few charging points on the highways of Paraná, Copel teamed up with Move to create a new supply network that can supply the high number of electric cars in the Paraná region.

Last Wednesday, the 27th, Copel announced that it intends to increase the number of charging points so that electric car drivers can recharge their vehicles on several highways in Paraná. About four of the new charging points, with 2 spaces each, will be installed in the coming weeks, being on the BR-376, which is between Londrina and Curitiba.

The points will be at Posto Juninho, in Ponta Grossa, at Parada do Pão de Queijo, in Tibagi, at Parada Soledade 2, in Imbaú and, finally, at Restaurante Elim, in Mauá da Serra. There will also be a charging point at Posto Monte Carlo 2, which is located on BR-376, in Tijucas do Sul, and will be opened to serve eletric cars that circulate between Curitiba and Joinville, in Santa Catarina.

In addition to these Copel charging points, other points will be installed along the BR-277, located in Paranaguá, Curitiba, Palmeira, Fernandes Pinheiro, Irati, Prudentópolis, Candói, Laranjeiras do Sul, Ibema, Cascavel, Matelândia and Foz do Iguaçu .

Copel's charging points on the BR-277 are from different suppliers, who manufacture other different models. Therefore, Move presented Copel with a system unification plan, where it will be possible to integrate data from all distributors on the same platform.

The new interaction system will also be responsible for informing about the chargers that are available, the amount of energy supplied by each of the charging points and even the amount of carbon dioxide emission, the CO2, which should be avoided when using electric energy, instead of using fossil fuels. In addition to the points that offer this information, drivers and other people will be able to access all this data for free through the application. Easy Electric Station, which is available for both Android and iOS.

Another advantage in expanding the number of charging points for electric cars in Paraná is that it helps to minimize the challenges of the sector, which has already suffered a lot due to the lack of appropriate places to recharge its electric cars and other electrified vehicles. But even with the difficulties, the sector has grown a lot in recent years, continuing in the expansion phase.

In Paraná alone, the sector grew by about 568%, becoming the 4th state with the largest number of electric cars in Brazil. In Curitiba, for example, until 2021, about 1,873 new electric cars were registered, making Paraná rise in the ranking of Brazilian cities with the most electrified vehicles.

Copel teams up with Move to increase the amount of cooldowns

Copel's electroway, which was inaugurated in 2018, currently has 12 fast charging points in about 730 km, connecting the extreme east to the extreme west of Paraná.

With this new expansion project, 11 more charging points will be implemented, totaling 23 points available to drivers of electric cars and other electrified vehicles. This addition of charging points will also work as a test that Copel is developing together with the Brazilian startup Move, a company specializing in technology solutions for managing and controlling electric car charging.

And according to Copel, in addition to expanding the number of charging stations on its electro-track, the project also aims to make a technological integration of all electric stations in the same command and monitoring system.

Tags: electric carEletric carsCopelrecharge pointsPR - Paraná
previous post Boticário announces R$ 200 million to expand production in PR and will generate 500 jobs
next post BR do Mar will boost cabotage cargo transport in Brazilian ports due to the benefits of the modal