Comperj: President of Petrobras met with mayors and has already given a date for the start of operations 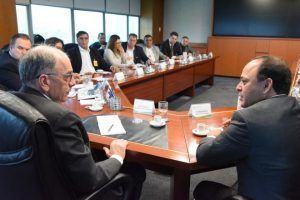 [supsystic-social-sharing id='1′]Comperj was once again on one of the main agendas at the meeting that brought together the members of the Intermunicipal Development Consortium of the East Fluminense (Conleste), which took place on the 24th in the presence of of the current president of Petrobras, Pedro Parente. He said that UPGN's Route 3 works are the state-owned company's main focus at the moment because of its ramifications of gas lines that it will process in the pre-salt layer of the Santos Basin. Parente reinforces: “There is nowhere to run, this work will have to happen one way or another, otherwise Petrobras will not be able to fully process its oil and natural gas production”.

According to cp, Marina Fachetti, who is executive manager of the Refining, Gas and Energy Projects department, the gas pipelines will pass through the municipalities of Itaboraí, Maricá, Guapimirim and Magé. She also emphasizes that the works on the North Ducts are already well advanced, works in which the objective is to connect the Comperj Network to the Reduc refinery, in the municipality of Duque de Caxias to transport LPG cooking gas and water.

Conlest demanded more clarity from Pedro Parente in the procedures involving the works, so they requested the creation of a kind of "working group" that will include the Petrobras board and the members of the consortium to learn about the steps of the project in time. real. Parente was willing to analyze the case and give an answer soon. The works are expected to be carried out between 2018 and 2019, with start-up in 2020.

On the 31st of this month, there will be a public hearing to discuss all the details of the works in 2018 in Niteroi. Will you want to participate? ANDThen access the post explaining the details, guidelines and the location of the event that will be open to the public. It will also be a chance to clarify all doubts and demand the immediate start of the works.

Tags:
previous post Comperj Public Hearing Out! All are summoned on a grand scale
next post Welders and Welding Inspectors Urgently Needed