COMPERJ finally: China won the bid today and we have a set date for the works 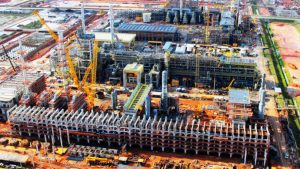 Chinese Shangdong Kerui presented the best budget to carry out activities at COMPERJ in 2018, surprising even Petrobras

[supsystic-social-sharing id='1′]Finally the COMPERJ has the definition of the company and the approximate date for the start of works, and you know who is laughing at that? Petrobras! Simply because it set a cap of R$2 billion for the completion of the UPGN and the Chinese offered a price of R$ 1,947,000.00. This value will give a good economy to the state's cash. The other companies that were participating in the bidding were stunned by the boldness and courage of the Chinese for budgeting such a low value, although experts say that 2 billion reais is not enough to carry out the works until the end. The name of the winning company is Shangdong Kerui.

In fact, Kerui Petroleum has already been in Brazil with activities for about 2 years with an office in Rio de Janeiro. Its branch basically consists of research, expansion and production of machines/inputs for the oil and gas industry, in addition to specialized engineering services for oil reservoir technology and hiring a specialized workforce. In China, it is the most powerful business corporation in its market segment and has more than 8000 thousand workers in the city of Dongying, which also has an oil field, which is the 2nd largest producer in the region.

Check the values of the COMPERJ bid

Forecast for the start of works

Although these “blessed” works have been postponed numerous times, those responsible for the sector say that it will start in the first quarter of next year, as the Chinese company will finance itself and must bring its equipment and parts straight from China to play the construction. Bearing in mind that the production of the Brazilian pre-salt deeply depends on these COMPERJ works being completed by the year 2020, otherwise we will be forced to reduce oil production. Keep an eye on the page Click Oil and Gas, when the hiring starts we will be disclosing the official recruitment contacts for the works. In the meantime, apply for jobs at Librelato SA, it announced vacancies for works on a temporary contract of 2 months until next month. Source: Petro News