Comperj companies want to bring in outside labor: Watch the union video 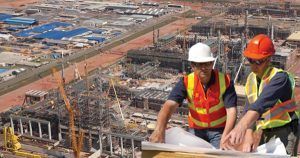 In addition, the Sintramon representative denounces schemes for selling vacancies for the Comperj works and promises demonstrations that the jobs are not for the residents of the region.

O Comperj and the works of UPGN are once again the subject of controversy a few months after the resumption of the project. Rogério Assunção, representative of the sintramon at the physical base of Itaboraí, he lets out the verb in public and talks about situations that are happening that are at least alarming about the hiring. Unfortunately, it is not sensationalism and may be the reason why there is so much delay in the beginning of the works, at least in the civil part of the construction site at this first moment. Understand next.

After messages passed by Whatsapp, many people, most of them from Itaboraí, arrived at the union's door at dawn this week thinking that the "file" would actually start, once again, it was speculation. In the early morning, there was already a huge crowd of people on the street, Rogério was forced to leave the union to report what had happened and to give a backstory to the reality of what is happening hotly.

Sintramon managed through a collective agreement that hiring and the receipt of CVs happen through them, in fact there is already a conversation between the president, companies and parliamentarians of the city about the best way to manage these hirings. He also points out that the worst part, which was the signing of the contract between Petrobras and China's Keuri, has already been signed and that now they are facing another dilemma: The company(s) that will work at Comperj are finishing works in other cities/states and want to bring their workers to Itaboraí, this would avoid operating costs, social charges and expenses with recruitment and selection. Sintramon put pressure and through a collective agreement, apparently informs that they will be the ones who will receive the CVs, even so, Rogério says that they are not satisfied and should appeal to reverse this situation.

THE Shidoung Keuri is associated with the Potential Method, which was the former CPE that worked on the first Comperj works, which would already be an eliminatory factor, since the “CPE” already has an operational contingent ready and they would put “their” workers on the works. There are even reports that the company rented a house to host people, that this house belongs to “a friend of the mayor”, coincidence, no? Watch the full video below: