Company develops the world's most powerful electric car, vehicle goes from 0 to 100 km/h in 2 seconds 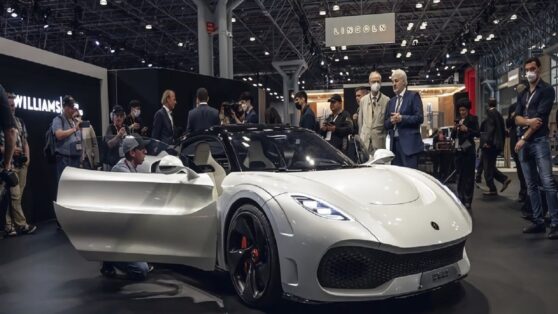 An Austrian company has developed the most powerful car possible in the world, capable of reaching 400 km/h. The electric car, in addition to having a luxury design, is still equipped with an engine that delivers 2,200 hp of power.

The new generation of electric vehicles is approaching reality faster than the world expects, and today's highlight goes to the Austrian automaker, Deus Automobiles, which, through a project together with the companies Italdesign and Williams Advanced Engineering, is creating the Vayanne project, a the electric car that is already being considered the most powerful car in the world, with a power of 2,200 horsepower, 203.94 kgfm of torque. All this configuration allows the vehicle to reach 0 to 100 km/h in just 2 seconds, reaching a maximum speed of 400 km/h.

Most powerful car in the world has great aerodynamics

Only these engine details make this electric car the most powerful in its segment today. The vehicle is in a process of development and all its power is due to the action of all parts, not just the electric motor modern. Regarding the design, it was created by Italdesign and is essential, as it provides 12 centimeters of free space in relation to the ground, being designed to offer a lower aerodynamic coefficient.

The product will be marketed exclusively to selected customers, so it will not be such an easy task to find it, even if the person is interested and has good financial conditions to invest in a car of the kind.

According to Dyrr Adash, Head of Strategic Partnerships at Williams Advanced Engineering, based on the collaborative partnership with Italdesign, which has been successful, the company is delighted to be part of the world premiere of the world's most powerful car. , an electric supercar that is looking to combine luxury with ultimate performance.

Other information may be published by the company in the future, as the start of large-scale production is scheduled for 2025, so until it reaches its launch date, other important data will be shared, such as details about the battery, electric motors. and its final price.

As stated above, the aim of the most powerful car in the world is to combine cutting-edge technology and a powerful electric car, as well as entertainment, safety and comfort.

Similar performance claims have been seen from companies many times, but what makes the Deus Vayanne electric car more interesting is the partnership with Italdesign and Williams Advanced Engineering. Having a prototype also helps, though it's not clear if it's fully functional or if it already has a powertrain.

In terms of styling, the world's most powerful car appears to be somewhat exotic, with highlights including the infinite loop shape on the front and rear grilles and the unbroken line of the taillight taking the same shape.

The rest of the exterior appears to be quite conventional, as does its interior, which features smooth curves combined with an ergonomic placement of physical controls, as well as a control display and an all-digital instrument panel. Unfortunately, the press release focuses on the electric vehicle's design rather than the technical data, so it's still unclear whether the model will deliver impressive specs.

Tags: electric carpowerful carEletric cars
previous post Record exports of Brazilian ore in 2022 to China, Canada and Finland: Nickel sulphide is fundamental in the manufacture of batteries for electric vehicles, mainly in the European market
next post Siemens multinational offers job openings for candidates with no experience in São Paulo, Jundiaí and Belo Horizonte