per Ruth Rodrigues
-
–
in Solar energy 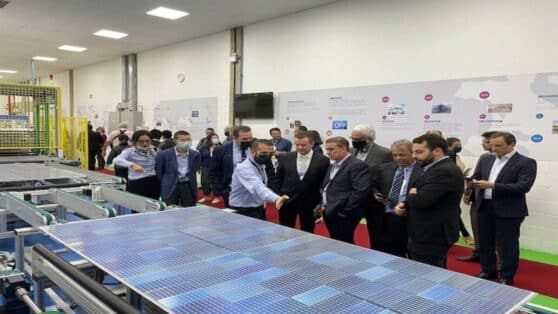 The company BYD announced last Tuesday, (19/04), the inauguration of its newest production line of modules to be used in solar energy systems. The factory is located in Campinas, in the state of São Paulo, and has state-of-the-art technology to ensure greater efficiency in the production capacity of this resource for those who use the company's photovoltaic modules.

At a meeting attended by the mayor of Campinas, Dário Saadi (Republicans), the company's global executive vice president, Stella Li, and other authorities and press vehicles, the BYD company announced the inauguration of its newest production line of its photovoltaic modules in the city of São Paulo, which will be used to install solar energy systems throughout the state, with much more productive efficiency and energy use.

Thus, the company's new factory has a high level of renovation of its equipment and processes such as multi-busbar, half-cell, 1/3 cut cell, micro-gap and negative-gap, as a way of guaranteeing more technology in the production of the new line of photovoltaic modules. In this way, the high power modules, mono and bifacial, ranging from 450W to 670W, will guarantee a very more efficient to solar energy systems, since the state-of-the-art technology used in manufacturing allows greater use of the sun's rays in energy conversion.

The expansion of BYD's enterprise will also make it possible to carry out the lamination and encapsulation of conventional or double-glass modules, in addition to the high technology used in the transformation of the production processes of the new production line, which guarantee BYD the possibility for the company to triple its capacity to reach 500 MW. This capacity is sufficient to supply a city with up to 750,000 inhabitants and will provide much more efficiency in BYD's production and commercial chain in the Brazilian energy market throughout 2022.

The BYD company commented that the inauguration of the new production line with the technology used in the manufacture of modules guarantees not only a breakthrough for the company, which will achieve high productivity and commercialization, but also for the solar energy market in Brazil, which is expanding and needs viable solutions for a better use of the potential of energy generation that the national territory has.

Thus, Adalberto Maluf, marketing and sustainability director at BYD Brasil highlights that “The world has been investing heavily in the expansion of renewable energy sources and Brazil has enormous potential to consolidate itself as one of the main leaders of this energy revolution, as we have high solar irradiation, all strategic ores for local industrialization and a lot of space for the growth of photovoltaic solar source in addition to our mostly hydric and renewable matrix”.

With the inauguration of the new production line in Campinas, BYD now has all the necessary equipment to measure and certify the photovoltaic modules developed in the Brazilian market. In this way, the company advances to become a reference in the production of equipment and in the use of cutting-edge technology in this process.

Tags: BYDenergySolar energymodulestechnology
previous post Siemens Energy offers more than 120 internship vacancies in various areas
next post Dozens of job openings in Nigeria for Brazilians today (21/04) in an oil and gas project on the African continent