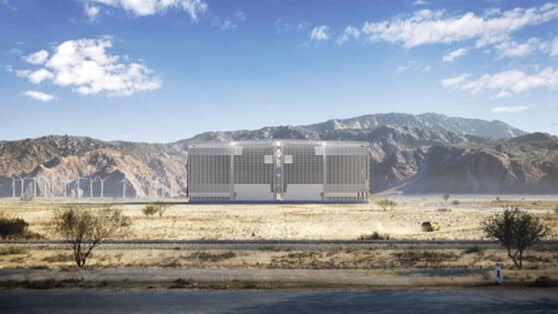 In order to balance and expand the country's power grid, China has begun construction of the world's first 100 MWh gravity-based renewable energy system.

The first 100 MWh EVx system has been in the works since March 2022, and aims to support grid resilience and the delivery of renewable energy to the Chinese national grid. The leader in sustainable grid-scale energy storage solutions, Energy Vault Holdings, NRGV, NRGV WS) (“Energy Vault”), announced on Friday that it will make the first installation of the EVx™ in China. Check out the official announcement.

The 100 MWh gravity-based EVx system is being built adjacent to a wind farm and national grid site in Rudong, Jiangsu Province, located outside of Shanghai, to augment and balance China's national power grid through the renewable energy supply State Grid Corporation of China (SGCC).

The project is the first utility-scale gravity-based storage deployment between a China and US company and has been approved by the city government and the provincial government, with support from the central government agencies of the People's Republic of China.

The EVx deployment received unprecedented accelerated preliminary approval on March 12 at a conference of intergovernmental agencies including the National Development and Reform Commission, Ministry of Information and Technology Industry, Ministry of Ecology and Environment, Chinese Academy of Sciences , Chinese Academy of Engineering, National Department of Energy, National Power Grid and National Electric Power Planning Institute, as well as some of China's leading scientists, academics and engineers, to accelerate and advance their state-mandated environmental policy, commonly referred to as the “30 -60”. This policy has a stated target of Peak Carbon by 2030 and Carbon Neutrality by 2060.

Energy Vault and Atlas Renewable have signed a US$ 50 million licensing agreement for the use of Energy Vault's proprietary gravity-based energy storage technology and its suite of technology-agnostic energy management and asset optimization software on the market. of Chinese energy.

The agreement also includes terms governing volume-based deployment royalties and covers maintenance, monitoring and beneficial reuse of waste materials in Energy Vault's composite blocks. The payment of the license fee of US$ 50 million is scheduled to be completed in 2022.

Energy Vault speaks out about the project

The Declaration states that the US and China intend to expand their combined efforts to accelerate the transition to a net-zero global economy through cooperation on policies to encourage decarbonization and electrification of end-use sectors; key areas related to the circular economy, such as green design and the use of renewable resources; transmission policies that encourage the efficient balance of electricity supply and demand across broad geographies; and distributed generation policies that encourage the integration of solar, storage and other clean energy solutions closer to electricity users, among other initiatives.

“China is rapidly expanding its use of renewable energy, along with annual energy storage mandates, in order to meet its decarbonization targets. We are delighted that EVx and our energy management software platform have already received local regulatory approval and are now being deployed as a critical enabling technology to support China's energy transition and carbon neutrality goals. In 2021, China produced more metric tons of greenhouse gases than the world's four largest countries combined and, as currently planned, will continue to increase emissions through 2030. We must act quickly to reverse this trend, and with local partners China Tianying and Atlas Renewable, we will do just that,” said the main CEO of the Energy Vault project.