Cargo handling company can get a contract at Comperj 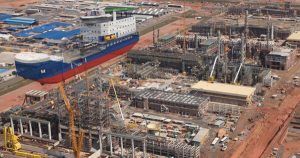 Comperj eagerly continues to operate the enterprise in Itaboraí – RJ, which according to projections, will be the largest petrochemical company in the country. This statement is justified because the new phase of Brazilian oil exploration needs this project to drain all present and future pre-salt production. Naturally, this new cycle of prosperity attracts the attention of many companies, one of which is Locar, which is about to get a contract to launch pipelines on route 3, which will connect Comperj to the Santos Basin pre-salt.

It turns out that Locar invested around 140 million reais in a ferry that launches pipelines in 2013 with the intention of providing laying services and supplying national demand, even in Latin America in various hydrographic works. Well, in 2014 the crisis arrived and with it, the extinction of several contracts, including Comperj, but now everything is favorable. She got a contract with Sapura Energy Brasil for the works of Termoelétrica d Sergipe under the management of CELSE, in addition to already talking with a Malaysian company.

It is worth mentioning that Locar is the only company with this type of vessel in Brazil and experts say that it will actually be hired for this project and others. Recalling that it will “outsource to an outsourced company” from Petrobras, although the state-owned company has not yet approved the bidding, the two companies that are in the final stretch is  Sapura and McDermott, Locar must provide services to one of them, regardless of which one wins.

See also ⇒ Guindax, which is another company in the field of cargo handling, has 150 vacancies open, they include: Welders, Boilers, Technicians and other roles, click here to apply now!