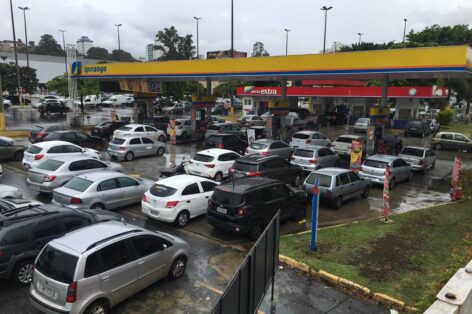 In addition to constant soaring fuel prices, conflict between Russia and Ukraine could lead to shortages in gasoline and diesel supplies in Brazil.

One of the consequences of the Russia-Ukraine conflict that most impacts Brazilians is the increase in fuel prices. It is known that Brazil is self-sufficient in oil, but not in derivatives. In this sense, the president of Rodoil, the largest fuel distributor in southern Brazil, Roberto Tonietto, warns of the shortage of refined products, such as diesel and gasoline – products that tend to become scarcer as the conflict progresses.

According to the president of Rodoil, Roberto Tonietto, Brazil is self-sufficient in oil, but not in derivatives. Reflections of the Russia-Ukraine conflict could worsen in the coming months.

“We were already facing some problems with the supply of gasoline and diesel in the market due to the lockdowns and the consequent interruptions in the production of derivatives. The resumption of production did not keep up with the pace of demand and with the current scenario, we have a new challenge”, says Tonietto.

According to him, quickly replacing the entire volume of Russian oil production, which accounts for 11% of world production, is a difficult equation to solve. “Even with the end of the war, this problem will take months to resolve. Perhaps we will arrive by the end of 2023 for this structural issue to have a solution”, he evaluates.

There is no risk of a lack of oil in Brazil, but the deficit in refined products such as diesel and gasoline is worrying and deserves attention.

Regarding the national scenario, Tonietto emphasizes that there is no risk of lack of oil in Brazil, but the deficit in refined products such as diesel and gasoline is worrying and deserves attention. "We process around 70% of our needs and buy 30% of refined products from abroad.. The problem is not in oil, but in derivatives, which create difficulties in supplying the domestic market. The consumer has not yet felt the problem of lack of product, but the distributors and service stations are already feeling, yes, problems of product shortage. However, we are mobilizing to find solutions in order to guarantee the flow of internal supply”, he concludes.

Flavia Marinho
Production Engineer post-graduated in Electrical Engineering and Automation. Experienced in the onshore and offshore shipbuilding industry. Get in touch for a suggestion of an agenda, disclosure of job vacancies or advertising proposal on our portal.