per Paulo Nogueira
-
–
in Economics, Business and Politics, Mining 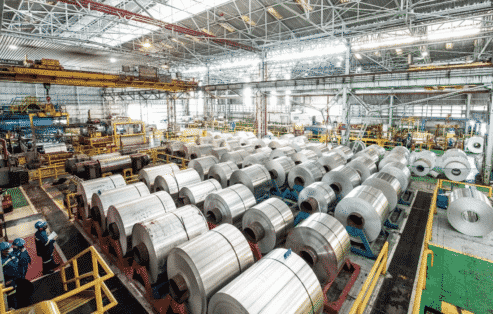 Sao Paulo, May 09, 2022 – Despite the unfavorable economic scenario we are facing, Companhia Brasileira de Alumínio (CBAV3) gained prominence in the market, posting a profit of R$ 426 million in the first three months of the year. The feat is even greater when we see that the same company had an estimated loss of R$ 133 million at the same time in the year 2021.

However, now the net revenue reaches R$ 2.3 billion and represents an exponential growth compared to the same period last year, ie 31%. Furthermore, EBITDA (Earnings Before Interest, Tax, Depreciation and Amortization Ratio) brought an increase of 53% in the first three months of 2022, which implies a total value of R$ 552 million.

The growth doesn't stop there. Aluminum prices rose, reaching the level of US$ 3,280/t, which represents a 56% higher share compared to the same moment in the previous year. Even with a drop of 9% (109 thousand tons) in sales volume, the company still managed to register a 32% increase in net revenue.

But how was this possible? The company guided a good part of its sales to the international market, through exports. In this way, it managed to sell 10 thousand tons of billet, a type of primary aluminum, in the first half of 2022. This is 10 times more than the same moment in 2021, when sales reached only 0.9 thousand tons .

On the environmental front, the company sold 4,000 tons more of recycled products compared to last year, also considering the purchase of Alux do Brasil, a large national supplier of secondary aluminum. With the purchase of 80% of the capital of Alux, CBA is now able to reach a production of 46 thousand tons of secondary (recycled) aluminum per year and gains space in the market for the sustainable initiative that contributes to the reduction of the production of greenhouse gases.

Even with the increase in sales and in the various domestic sectors, the premium for primary aluminum (Platts) fell by 0.6% in the first quarter of 2022, when compared to the previous quarter. But compared to the same period in 2021, there was an increase of 22%.

It was not just the rise in aluminum prices that brought these results. Factors such as a catalog of varied products, integration between the company's internal sectors and directing sales to the foreign market are largely responsible for this excellent result.

Strengthening its environmental front, CBA is moving to advance the completion of sustainable projects such as the new oven feeding technology that reduces the emission of greenhouse gases that contribute to global warming. The completion forecast is for the third quarter of 2022, which would only be delivered in 2023, and will bring greater energy efficiency, greater safety in operations and a reduction in water consumption for the aluminum manufacturing process.

CBA also expands its market, in this first quarter of 2022, launching the Primora line that brings different aluminum structures for different projects involving windows, doors and facades for medium and high standard buildings.

Another major victory for CBA in this first quarter was the reduction in carbon dioxide (CO2) emissions during aluminum production. According to records from the Greenhouse Gas Emissions Inventory (GHG), CBA produced a value 5 times lower than the world average, which is a very positive result for Brazil. In this way, CBA became the only aluminum producer in the world to achieve the goals established to reduce the emission of these gases.

In addition, the company started to manage the 21 hydroelectric plants in Brazil, which were previously supervised by Auren, with a renewable capacity of 100%.

Due to all these achievements on the environmental front, the company received an A grade in the annual assessment of a highly respected international ranking on climate change, the CDP (Carbon Disclosure Project).

The company also leaves nothing to be desired on the social front. In the first quarter of 2022, the company recorded a rate of 15.3% of women making up the general staff, an increase of 1% compared to the previous quarter. The company's goal is to reach the percentage of 50% by the year 2030, with a good distribution of positions, including management.

Who is the CBA?

Founded in 1955, Companhia Brasileira de Alumínio (CBA) offers sustainable, high-quality aluminum for the entire national and, more recently, international scenario. The company uses bauxite to produce its primary (pure) aluminum and secondary (processed) aluminum. All always thought to bring the balance between the environment and the industry.