Automobiles: manufacturing of Volkswagen and Mercedes-Benz suffers stoppage in Brazil, due to insufficient materials 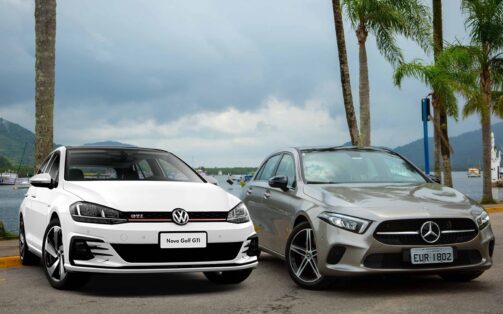 In Brazil, the problem that arose in the pandemic was exacerbated by the conflict in Eastern Europe and the assembly of Volkswagen and Mercedes-Benz cars is suspended.

Since the beginning of the pandemic, the shortage of electronic materials for the production of cars has been causing serious losses. Until today, for Brazil and other countries, this problem is still recurrent. The scenario worsened even more with the last conflict between the two countries in Eastern Europe, Russia and Ukraine, as there was a reduction in the supply of materials. Volkswagen and Mercedes-Benz have already been negatively impacted.

According to the article written by Bruna Machado for the Capitalist portal, on Monday, April 18, Mercedes-Benz and Volkswagen, two giant car makers, had to suspend their activities in Brazil due to insufficient essential production materials.

In this first half of 2022, there were still some expectations for the automobile sector regarding the supply of the necessary parts in Brazil. However, with the conflict between Russia and Ukraine added to the simultaneous increase in cases of covid-19 in China, there has been a change in plans.

On the stoppages of the major automakers

Thus, automobile production in Brazil has already begun to be suspended. Mercedes-Benz, which New to Electric SUV, had to decree collective vacations for all employees who work in the production of automobiles such as trucks, buses, cabins, etc. Thus, around 6,000 employees from the units in the states of São Paulo and Minas Gerais will only return to work at the beginning of May.

In addition, Mercedes-Benz, which is in the high season for trucks in Brazil, had already paralyzed the functions of 600 workers for a period of 12 days, ending on March 25th. After this downtime, Mercedes-Benz suspended the work of another 600 employees, causing further interruptions in car manufacturing.

In turn, at the Volkswagen unit in São Bernardo do Campo, in the state of São Paulo, for example, there was a need to stop operations until the holiday of April 21, on Thursday, taking into account that there was a high amount of cars with pending materials to be finished.

Linked to this, another Volkswagen plant – a brand that will recall electric cars – also had to interrupt his activities. This time, due to the lack of adequacy of the production line, the automaker from Taubaté, also in the state of São Paulo, suspended its production.

With all this in mind, it is estimated that the manufacturing activities of the automobile sector in Brazil will only be regularized next year, 2023.

Volkswagen continues to work on the development of its MEB electric car platform and one of the next innovations in this architecture announced this Wednesday afternoon (13) will be a mid-sized electric sedan, the first of the brand, which will serve as a successor to the current Passat, however without emitting any pollutants and which promises to make a big leap in terms of autonomy. Until then, Volkswagen's platform has already provided the basis for models in the ID line, such as ID.3, ID.4, ID.5, ID.6 and ID. Buzz, however, the future electric sedan promises to go one step further.
Known as Volkswagen Aero B, the electric car did not have much technical data released by the German automaker, however during the last results conference the company released some important data about the electric sedan. To know more, read the full article here at this link.

Tags: automobilesMercedes-BenzVolkswagen
previous post The future of logistics: Autonomous trucks can take on up to 90% of long-distance travel
next post EDP Brasil will carry out a project to build a new solar power plant in the state of São Paulo