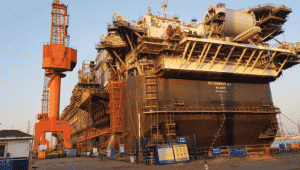 This FPSO will be destined for operations in the Lula Norte Field, Petrobras informs that the crew will be Brazilian for outsourced and public tenders

THE Petrobras informs that the Floating Storage and Transfer Unit (FPSO) is ready and will leave the shipyard in China, COOEC, heading to Brazil by the end of March. This platform will operate in the north Lula field and it is a unique Petrobras unit. In this one, all that remains is the integration of the modules, joining the Topside of the system. As the unit is 100% owned by the state-owned company, most of its crew will be composed of Brazilians, naturally.

The initial departure planned for the first time, was scheduled for December 2017, with the first operation in the same year, but was postponed for technical reasons. The P-67 will travel through international waters via a towing system called Dry-Tow and will be carried out by the maritime company Dockwise, the vessel that will be used for the towing is called the Dockwise Vanguard. See what this sea monster looks like in the photo below:

This unit is part of the fleet of 17 FPSOs that will be part of the Brazilian fleet until 2021, some from Petrobras and others from bidding on other companies. Modec has already won some bids and is in competition for a few more units. Access the list of platforms that will be part of Brazilian oil production by accessing the full article here. That's not counting drilling rigs, seismic vessels and offshore units. The possibilities are many.

To be part of the Petrobras team is not easy, but it is not impossible! If you study and pass the tests, the possibilities of entering the state and having your dreamed professional stability will increase in a way that has already been seen. But for that, you will need to have a high school, technical or higher education. But if you haven't already, don't worry! The Premium school in partnership with Click Petróleo e Gás solves this in 45 days, releasing your certificate, fully authorized by CREA and MEC, without tricks and without fraud using the professional equivalence method. ⇒CONTACT US HERE⇐ ⇒THE WORKBOOKS TO PASS THE CONTEST YOU CAN FIND HERE⇐