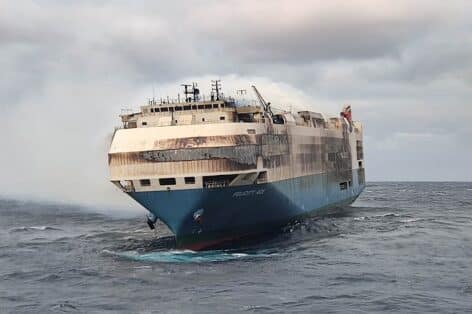 Operator MOL has banned the transport of electric cars after an incident with the Felicity Ace ship, which caught fire in February this year with vehicles from Volkswagen Group Porsche, Bentley, Audi and Lamborghini.

O Felicity Ace ship, in February of this year, went up in flames and drifted in the Atlantic Ocean for days. The fire lasted for several days, being caused by the lithium batteries of some Porsche, Bentley, Audi and Lamborghini electric cars that were being transported by the vessel. The company that operates the ship involved in the incident, Mitsui OSK Lines (MOL), said on Tuesday that it no longer plans to transport used electric cars.

MOL is one of the largest companies specialized in the maritime transport of electric and combustion cars in the world. According to Vinson & Elkins, a law firm, the fires of Porsche, Bentley, Audi and Lamborghini on the ship Felicity Ace generated the biggest loss in the industry, priced at US$ 500 million, which is equivalent to R$ 2.3 billion in direct conversion.

A spokesperson for MOL commented on the company's decision to ban the transport of used electric cars. When an electric car battery made of lithium is set on fire, its temperature can reach 2,700 degrees Celsius.

The tactic to put out this fire is different and the fire suppression system used in current ships is not capable of controlling a fire like the one that happened in February of this year. The techniques known to control this type of fire, as happened with the Porsche, Bentley, Audi and Lamborghini present on the Felicity Ace, are still not practices that can be applied in places with limited space.

The Felicity Ace, in February, started to burn near the island of Faial in the Azores archipelago, in Portugal. The ship flew the Panama flag and had 4,000 electric cars from Porsche, Bentley, Audi and Lamborghini, from Grupo Volkswagen. In total, vehicles such as ID.3 and ID.4, 1,100 examples of Porsche cars, 21 Lamborghini units and 189 Bentley vehicles were burned.

The cargo ship had left Endem, located in Germany, where the group has a car factory, and had the United States as its final destination. When the Felicity Ace Ship was near the Azores, in Portugal, about to start crossing the North Atlantic, he noticed the start of the fire, which spread quickly.

The vessel with vehicles from Porsche, Bentley, Audi and Lamborghini had a crew of 22 people and all of them were quickly rescued by the Portuguese Navy.

Fire of ship with electric cars did not generate pollution, say local authorities and company responsible

The ship was sailing 170 km off the island of Faial and spent many days there. According to the country's authorities, there was no sign that the vessel, with vehicles from Porsche, Bentley, Audi and Lamborghini, had polluted Portuguese seas.

The recovery of the ship was simpler, as well as the verification of the damage caused to the ship and what was transported. It is worth mentioning that incidents like these with cargo ships are rare and for each load that is lost, about 4 thousand cars are lost, given that this is an average of Ro On Ro Off freighters, which are more common in ports around the world. all. In Brazil, the port complexes of Santos and Vitória are the ones that handle the most ships of this type.

Tags: electric carEletric carsFelicity AcelamborghinishipshipsPorsche
previous post Panasonic announces investment of R$ 1.6 billion for the construction of a solar plant in Ceará that promises to generate 4 thousand jobs
next post Energisa opens enrollment in a free course for training electricians in MG