Multinational vehicle manufacturer Volkswagen, suspends production of Polo, Virtus, Nivus and Saveiro, and puts more than 2000 employees of its factory in SP on collective vacation

per Flavia Marinho
-
–
in Industry and Civil Construction 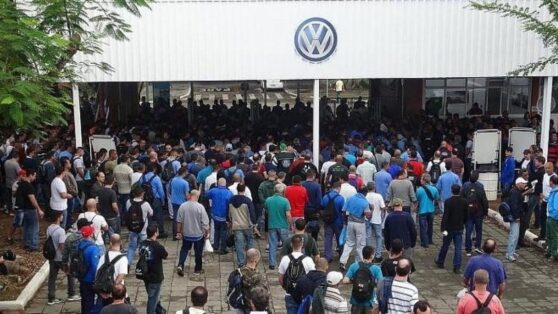 The German multinational Volkswagen may also stop manufacturing the Gol, Voyage and Fox at its plant in Taubaté, SP

After the departure of the great Ford automaker from the country, taking the EcoSport SUV and the Ka family out of the line, the German multinational Volkswagen, announced that between May 9 and 28, more than 2500 employees of its factory in São Bernardo do Campo, in the ABC Paulista, SP, will go on collective vacation due to the lack of components. This suspension of activities is called shutdown, a discounted time off from the bank of hours.

In addition to semiconductors, Volkswagen Anchieta also lacks tires and audio systems. As a result, the production of the Polo, Virtus, Nivus and Saveiro models will be compromised for a week, even more so since the plant recently operated with only one shift, for three months.

Another half of Volkswagen's factory floor personnel will continue to work, as will another 8,000 employees at the unit.

In Taubaté, where the Gol and Voyage models are made, production with two work shifts – the second resumed in early April – will also be suspended for a week.

Volkswagen still hopes that the supply of electronic components will return to normal from the second half of this year. It is worth mentioning that these semiconductors are used in various electronic parts of vehicles, such as transmission, entertainment system, security, lighting, air conditioning, among others.

Volkswagen released a note about the stoppage: “Volkswagen do Brasil informs that the factory in São Bernardo do Campo/SP (Anchieta), as of 5/9/22, willthere will be 20 days of collective vacation for the two shifts, due to the lack of semiconductors.” The manufacturer does not say how many employees received collective vacations, but the ABC Metalworkers Union says that there are 2,500 workers out of the 4,500 who work on the production lines. In total, the Anchieta factory has approximately 8,200 employees.

At the beginning of April, Mercedes-Benz put 5,600 employees from São Bernardo do Campo (SP) and Juiz de Fora (MG) on collective vacation. The stoppage took place between April 18 and last Tuesday (3).

According to the company, the main reason is the reason for the global crisis and the readjustment of the production of bus chassis trucks and aggregates in the city.

In a note sent to g1, Mercedes-Benz informed that it grants collective vacations to part of its productive employees, with around 5 thousand in São Bernardo do Campo (SP) and 600 in Juiz de Fora.