99, Raízen, Caoa Chery and other companies plan to install 10,000 charging points for electric cars in Brazil 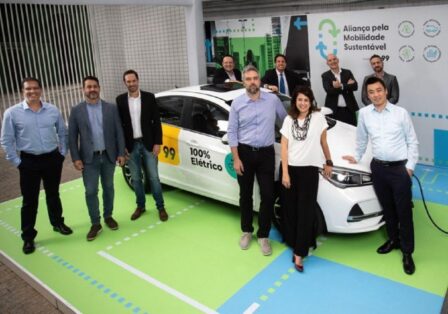 99, Raízen, Caoa Chery, Ipiranga and other companies are investing in the installation of 10,000 new charging points in Brazil, with the aim of boosting the sale of electric cars in the country.

About nine companies in the urban mobility sector, especially 99, Raízen, Caoa Chery and Ipiranga, announced this Tuesday (26) that they are launching a coalition with the aim of democratizing access to eletric cars in the country. Known as Alliance for Sustainable Mobility, the initiative is led by the application company 99 and seeks to leverage the infrastructure for electric cars in the country through the installation of charging points. Movida, Unidas, Electric and Tupinambá are also part of the initiative.

10,000 charging points will be installed in Brazil

According to Thiago Hipólito, at first, the main companies in the mobility sector are being united, such as 99, Raízen, Caoa Chery and Ipiranga, so that there are cross-investments within the area of expertise of each company. In this first phase, it will also be defined how each company should contribute so that the goals are reached.

As Hipólito had already explained, at first the 99 will bring 300 electric cars in 2022 to be tested on the platform. The vehicles will be purchased, for the most part, through partnerships with automakers and rental companies and also from their own resources.

São Paulo will be the Pioneer Hub in the 99, Raízen, Caoa Chery and Ipiranga initiative

According to Hipólito, with the lessons learned from this first phase, companies will study the best way to offer 10,000 electric cars to drivers by 2025 until reaching 100% of the fleet in 2030.

The aim is to develop joint strategies to finance projects and drive the development of the entire ecosystem so that it is possible to expand the use of vehicles. The discussion is still ongoing between the companies.

With the alliance, 99, Raízen, Caoa Chery and Ipiranga seek to achieve zero carbon emissions by 2030 and São Paulo will be the first pioneer hub for the installation of charging points. According to members of the alliance, the intention is for the most sustainable and clean cars to be accessible to the company's partner drivers, in terms of infrastructure and finances.

The initiative to implement new charging points aims to boost all the infrastructure necessary for the electrification of the Brazilian fleet, by supporting parts suppliers and assemblers of these vehicles, making their rental between app drivers easier and at a lower cost.

The electric vehicle market is advancing in the country and in 2021 alone, the sector grew by about 77% compared to 2020, totaling about 35 thousand vehicles sold according to data from the Brazilian Electric Vehicle Association – ABVE.

Among the impasses that must be overcome is the high price of the vehicle, especially when compared to combustion vehicles and infrastructure bottlenecks, with few charging points located outside large centers. According to Hipólito, the alliance between 99, Raízen, Caoa Chery and Ipiranga, seeks mainly to reduce these bottlenecks in the segment with the sum of efforts of various sectors acting side by side.

Tags: electric carEletric carselectric cars in Brazilrecharge points
previous post Raízen invests R$ 300 million to build new biogas plant in São Paulo
next post The port of Macaé is closer than ever to getting off the ground: Tepor receives a license to install the Natural Gas Processing Unit, authorities and the population of the “petroleum city” celebrate